‘This truly was our project’

Home > News > ‘This truly was our project’

‘This truly was our project’

ECOstyle continues its growth under the wings of Vendis Capital

Pioneer and entrepreneur Anne-Jan Zwart started supplying responsible and natural products to the agricultural sector as early as 1967, when sustainability was a long way from being the trendy topic it is today. Once Jeanine de Vries-Zwart and her brother Jan-Sido had been at the helm of the family business for a while as the third generation to do so, they decided they didn’t want to embark on the next phase of their growth alone — and they opted to have Marktlink by their side in their search for a growth partner.

That search ended in an acquisition by private equity partner Vendis Capital. With growth capital, a wealth of e-commerce knowledge, lots of experience in building brands and respect for the values of the family business, ECOstyle is making preparations to face the future under a new management team.

Even through ECOstyle was mainly active in the agricultural sector in its early years, the business grew to become a developer and supplier of environmentally friendly products to both professional and hobby gardeners over the decades that followed. Its yellow and green packaging stands out at garden centres in the Netherlands and beyond. ECOstyle is not just a pioneer in sustainability on the Dutch market: it has branches in Belgium, Austria and Denmark too. In total, the business employs around 100 people.

Ready for the next step

Up until the point where the business was taken over, Jeanine de Vries-Zwart (43) had been serving as its director for a number of years. “Even though feel more at home in the realm of business strategy, I happily took charge of the business for a number of years. Even so, two years ago, we decided that the time had come to start talking about the future as a family. I was the sole shareholder who was still playing an active role at the business. We got together to explore what the best option for our much-loved business would be. We identified a number of great — and above all, huge — opportunities for growth, both in the Netherlands and abroad. However, realising those opportunities would demand a great deal from us, and we also needed a new impulse financially. I felt the most appropriate option ahead of this new phase was to appoint a new director who could take charge of the business. On top of that, my new role as company auditor suits me much better as a person. When I look back on the process, I think it was great that me, my brother and my father were able to get together and make the decision to start the search for a partner or acquisition candidate that could help our business continue to grow in the future.”

Prior to the acquisition process, Jeanine set out to find a consultancy firm who were capable of more than just put a decent spin on the numbers. And that’s when she found Marktlink. “We really valued the network that Marktlink has across Europe, as well the fact that its consultants had a 360-degree view of the process and knew the playing field like no other. They also genuinely respected that there were things we wanted to research, prepare or contribute ourselves. This truly was our project, and the confidence we had in them immediately only grew throughout the sale process as a result.”

It may seem like an unusual choice for a family business with a clear mission and family culture to become part of the portfolio of an investment fund or private equity partner. “We took a highly critical approach, as it was essential for us to stick to our values. In addition, there was a lot of interest in our business, both domestically and internationally, so we had plenty of options to choose from. In the first instance, I never expected that we would end up going for a PE partner, but as a result of the thorough pre-screening process performed by Marktlink and the constructive initial discussions, it became clear pretty quickly that Vendis presented a great possible match.”

Exactly what I hoped to see

Vendis invited Jeanine to take a look behind the scenes of one of the other businesses in its portfolio. “And I saw exactly what I hoped to see. The brand of this business was at its core, it was still all about its people and its culture remained exactly the same. The people from Vendis made a genuine effort to become part of the business, and its management was given all the space it needed to manoeuvre. It was a completely different scenario from the stories you often hear about private equity partners. During the due diligence process too, the ambitions were clear to see between the lines. Vendis itself had also already carried out a process of careful and in-depth research.”

“Of course, the final stage — in which everything that’s neatly come together suddenly sits at different ends of the table again — is a tense moment. But that’s all part of the journey. To me, the most difficult thing about this period was having to deal with all the different roles I was expected to fulfil. As a director, you focus on your daily tasks, but there were things stirring below the surface that I wasn’t really able to share with anyone else. Once the deal has finally been done, you feel a weight fall off your shoulders, and you feel happy and relieved. But it also means it’s time to say goodbye. I initially expected some type of euphoric climax, but I was actually left with mixed feelings. After all, I grew up with this business, I kept a secret from everyone for a long time and the moment had now come to share this with everyone. Due to the coronavirus, we were forced to do things a little differently and partially online, but we can look back on the best possible farewell we could have given our family business, and on a fantastic introduction between the team and the new owners.”

Allow the management the room to manoeuvre

Several months have passed since, and Jeanine feels perfectly at home in her new role as company auditor of ECOstyle — the role in which she is staying active at the business, aside from being a minority shareholder. The real estate of the business also remains in the hands of Jeanine, her brother and her father. “As an auditor, I focus on the general strategy of the business and on sustainability. It’s important to me for the new management to be given the room it needs to develop its own plans, so I tread carefully in that area. I don’t have any new plans personally for the time being, but I’m bound to make some over the coming months. Simultaneously selling and managing a business, living through a lockdown, working from home and online and home schooling our three children all at the same time demanded a great deal of energy, so I’m mainly just enjoying the slower pace of life after the period we’ve been through. Of course, my new role gives me the chance to follow the way in which ECOstyle’s ambitions are being turned into reality up close. I really value the chance to stay part of that.” 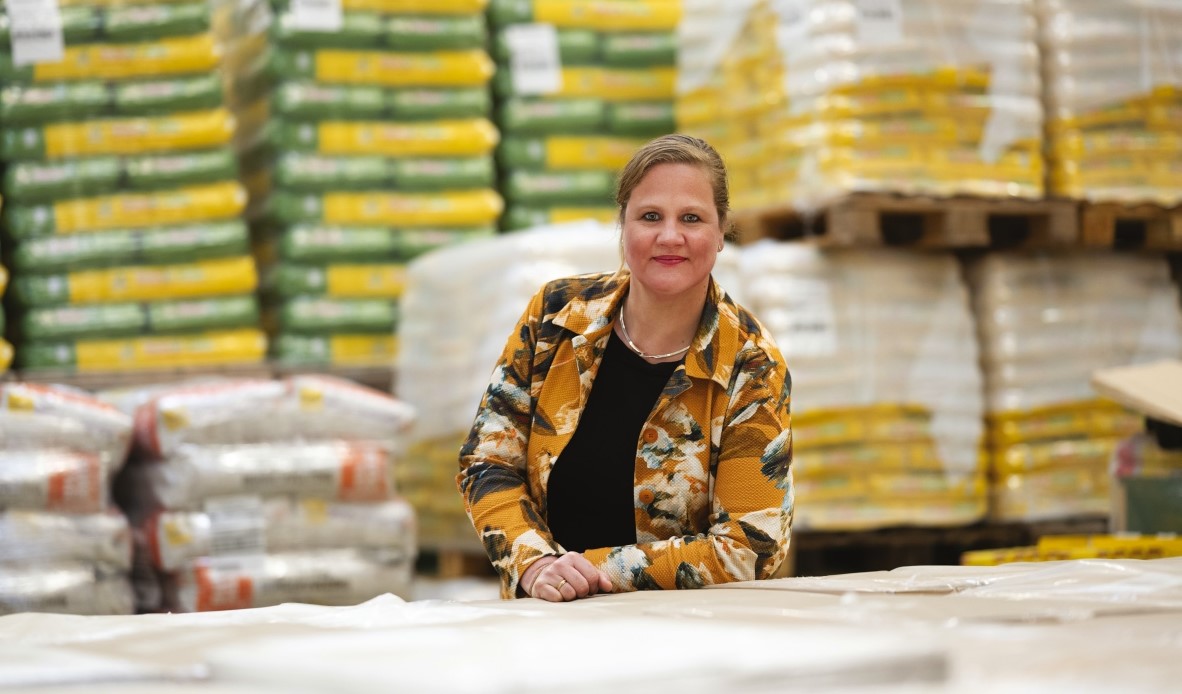